One Project I Regret & Why

All right, time for an honest moment here: I’ve been thinking about doing this post for a while now, but I’ve felt super nervous about it because I’m basically admitting that one of our biggest projects wasn’t the best idea. In fact, I kinda regret doing it, which is awful to say, but it’s true. And the project I’m talking about is our master bathroom vanities. For a while now I haven’t been happy with them, which I shared a little about in this post back in early 2017. Gosh, I cannot believe it’s already been two years! Well when I shared that post the chalk paint I used on the dressers was chipping pretty heavily, so I ended up sanding them down and repainting them both again (I shared about that process in this post). That was actually the last update I shared and since then it’s been a bumpy road with these vanities. 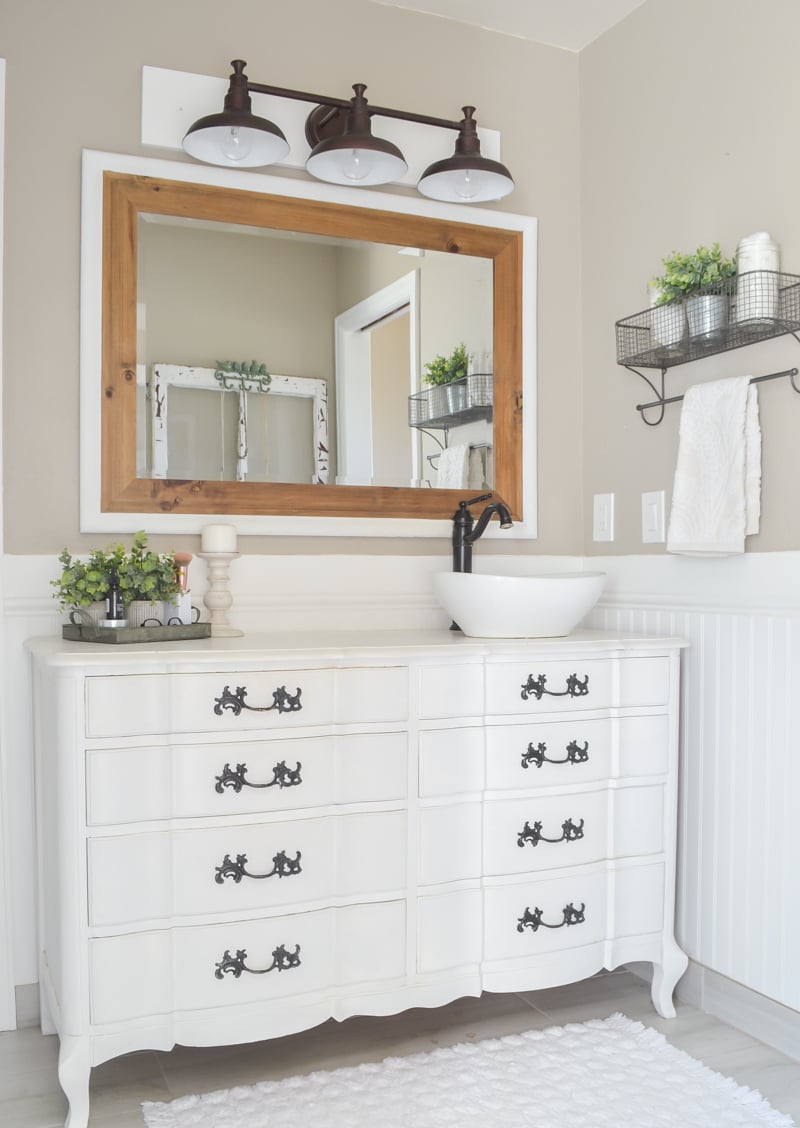 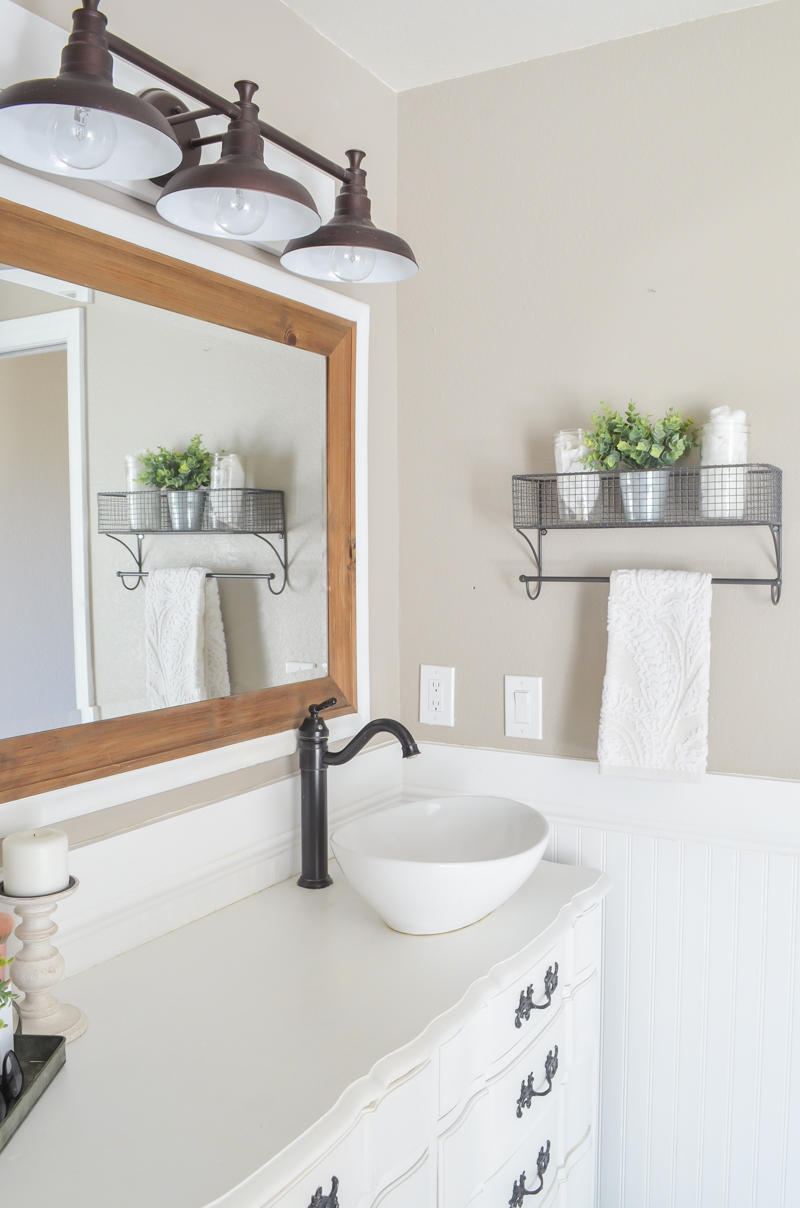 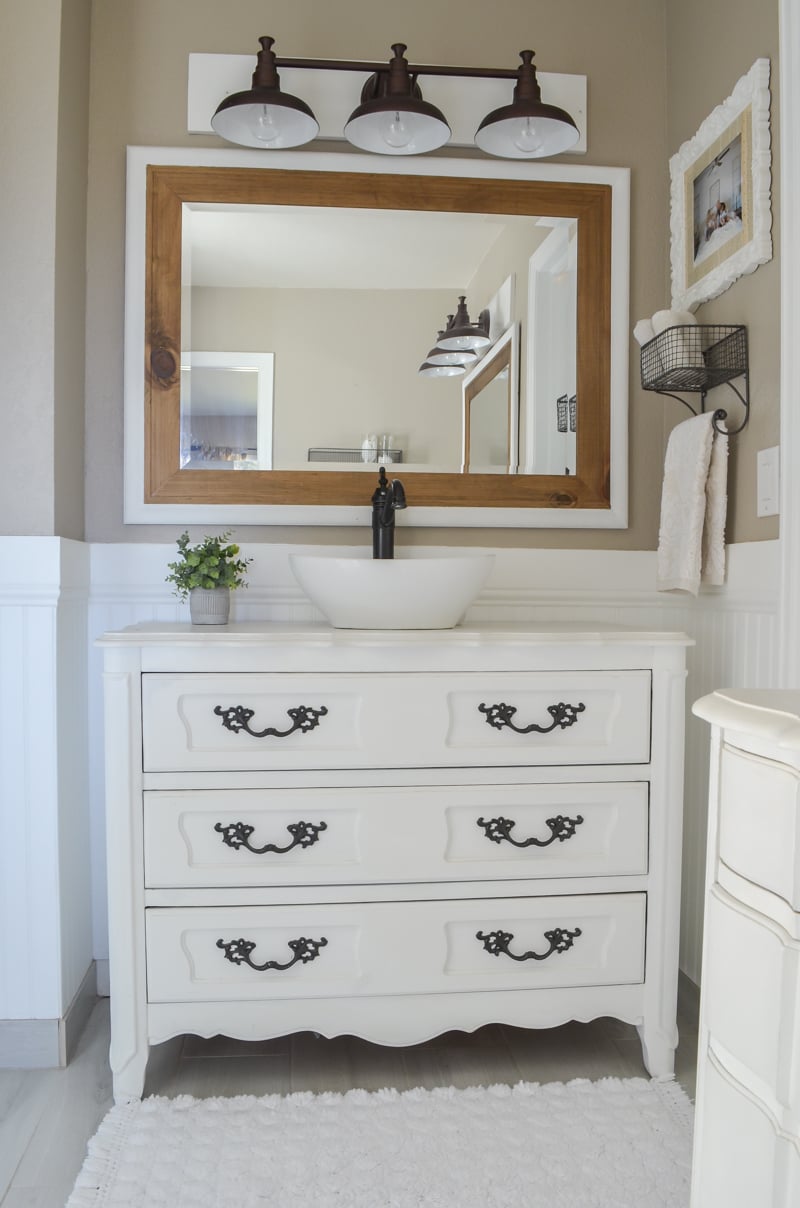 Since I repainted the vanities in 2017, they’ve held up fairly well. If you were around way back then you might remember that I used a clear poly on the dressers instead of wax, which is what I had previously used. Overall the poly has done a MUCH better job at protecting the paint. However, I’m still having issues with the paint chipping on the top of my vanity, which is the bigger one. My husband’s vanity (pictured above) is in pretty good shape overall. But for some reason the top of mine has never done well and now it’s peeling in spots and there is some pretty serious water damage around the sink. 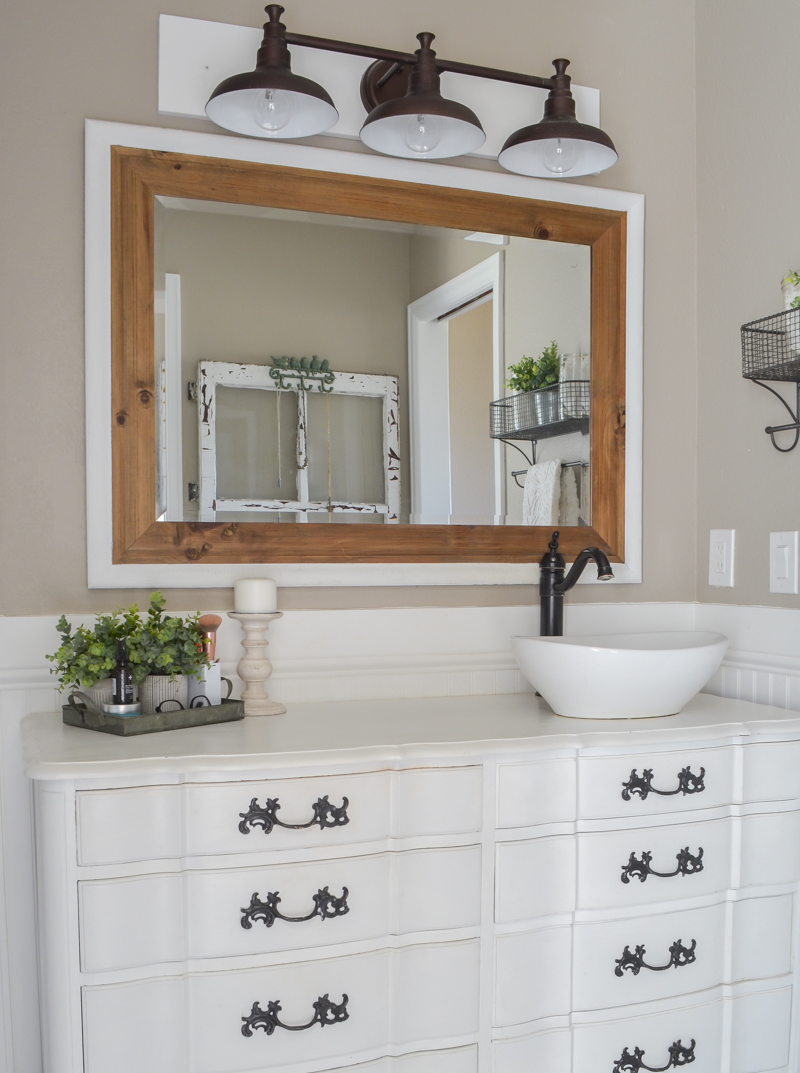 The water damage on top of the larger vanity is primarily around the faucet and it just keeps getting worse as time goes on. It’s not caused by a leak or anything like that, it’s just the repetitive exposure to water that is starting to cause a problem. I’m not sure why that area is doing so poorly, but I’ve resorted to wrapping a small towel around the base of the faucet to keep the dang thing from getting any worse. 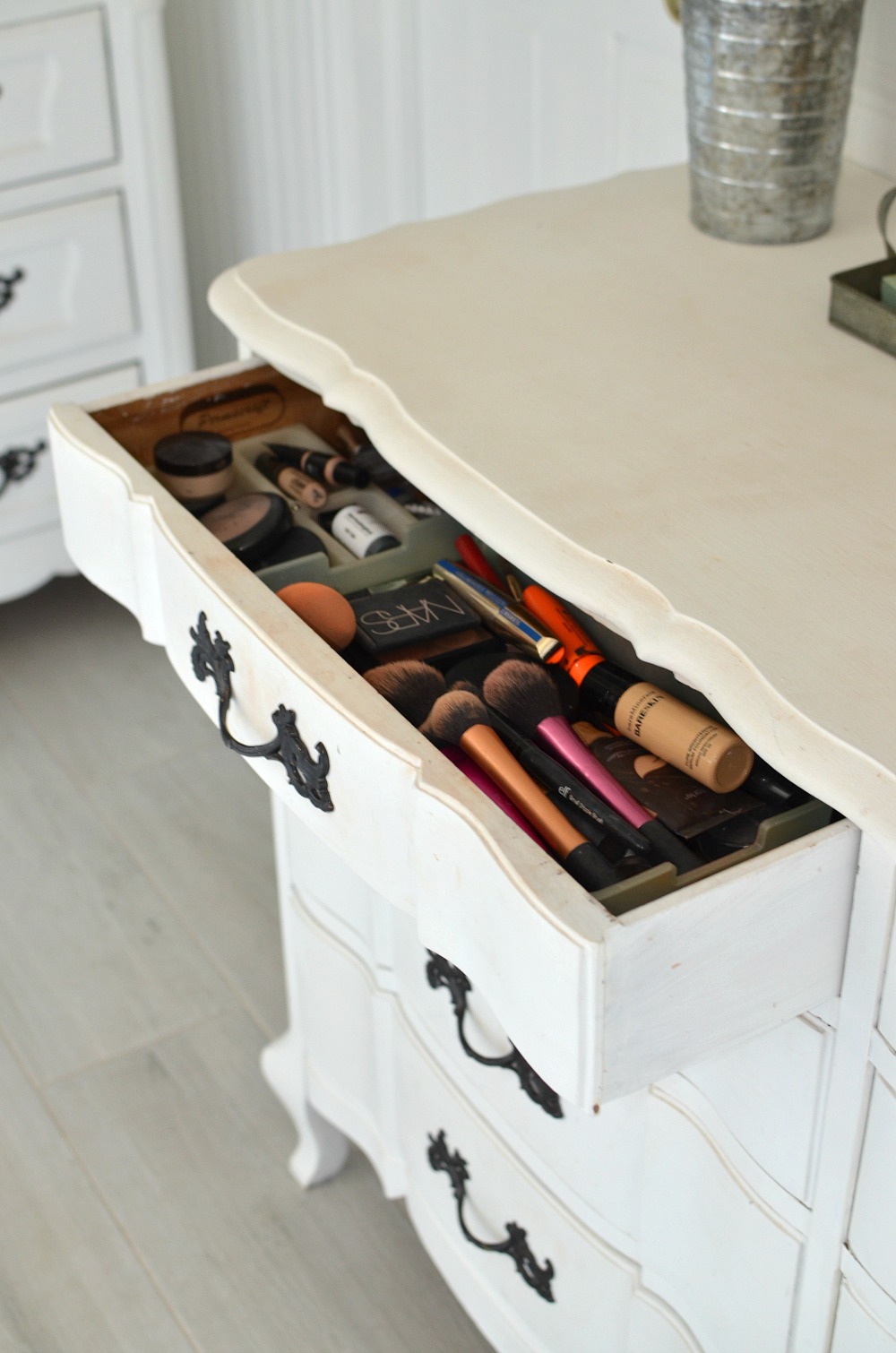 Aside from the water issues, I’ve frustrated by the limited storage space in these dressers. Obviously we realized that would be the case when we chose to go this route, but it’s definitely been an ongoing challenge. Converting these dressers into vanities (you can see how we did that in this post) means that we cannot use several of the drawers. In my vanity for example, I can only use four of the drawers, which isn’t great when it comes to storing things like makeup, my blow dryer, curling irons, etc. I’ve downsized considerably, but there simply isn’t enough space for much at all and storage is even worse in the smaller vanity–none of those drawers are functioning. I’ve thought about buying a small cabinet of some kind to store those extra things, but our bathroom (and adjacent closet) is quite small so we just don’t have the room for it. 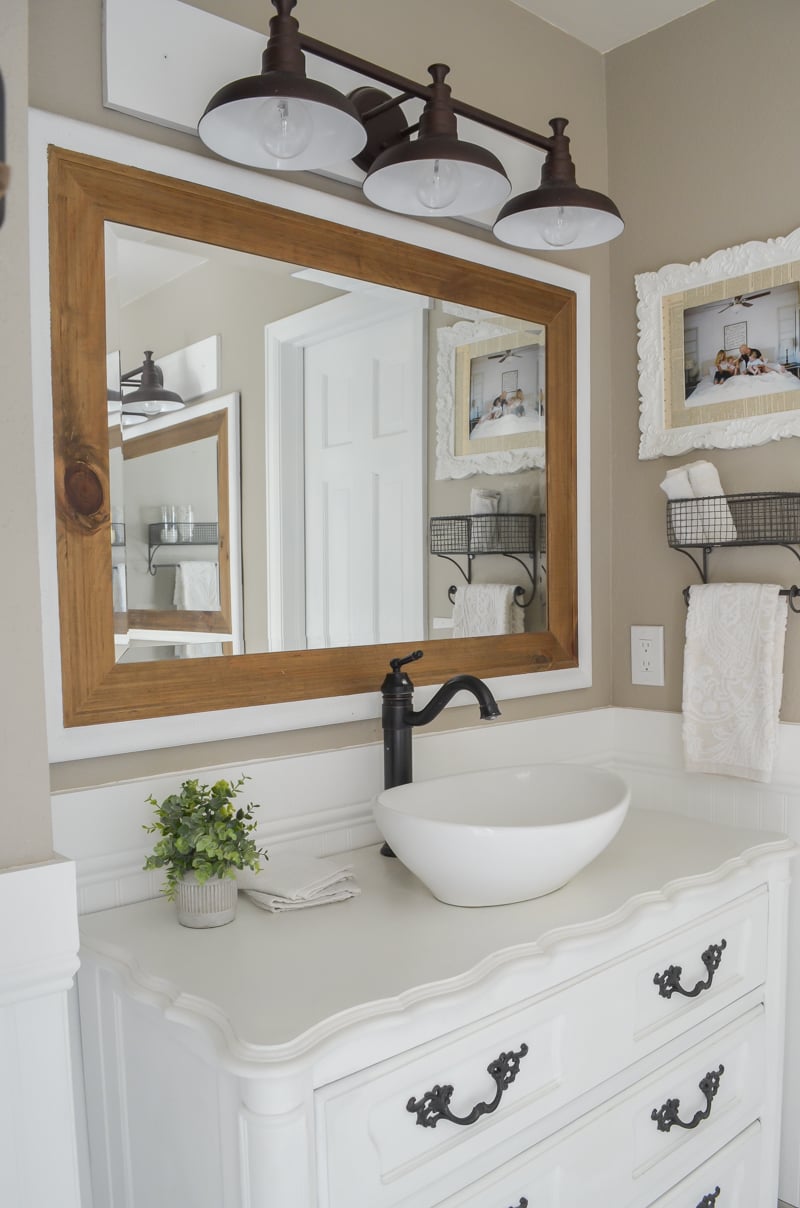 As much as I hate to say it, I do think we will eventually need to replace these vanities for something more durable and more functional. And obviously that makes me sad, because I just adore the way these look in our bathroom, but they simply aren’t holding up like I hoped they would. And maybe it’s not totally fair to say I regret this project, because they were a BIG part of my vision for this bathroom, plus they saved us a ton of money. (And remember that time Country Living Magazine shared our bathroom makeover?!) But if I could go back and do it again I would have probably went a different route just because we have had so many issues with these over the past few years.

You guys know I’m pretty much an open book and I like to be totally honest about our projects, so sharing what went right and what went wrong is all part of the story–especially when you live in a fixer upper. And I also think it’s important to share the trial and error process, just in case any of you end up doing similar projects in your own home. Anyway, I’m not sure what we’ll end up doing with these vanities, but I’ll definitely keep you all updated when we do figure it out!

Thanks so much for hanging out with me today on the blog, I truly appreciate it. xoxo 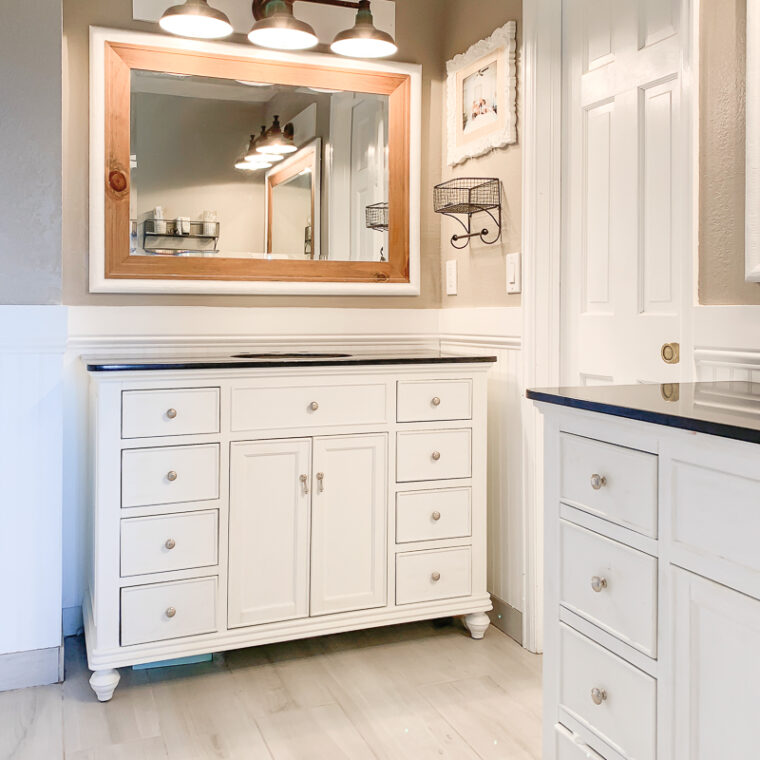 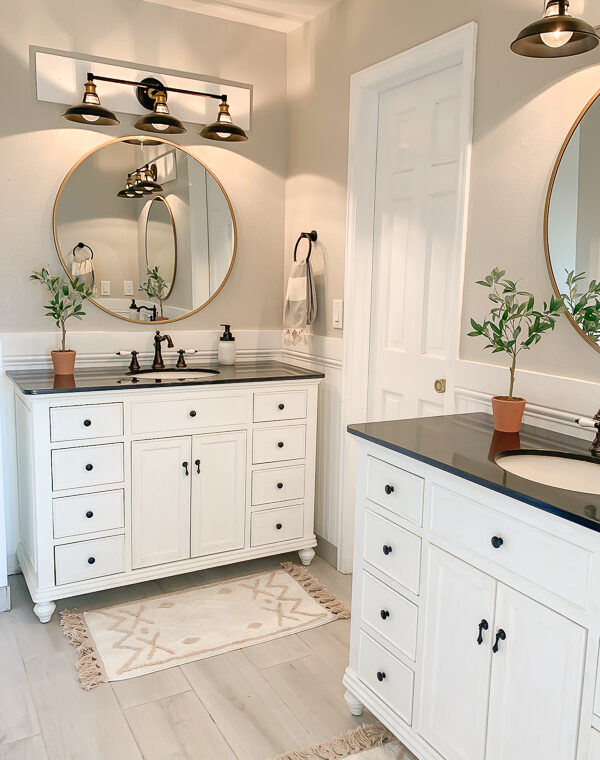 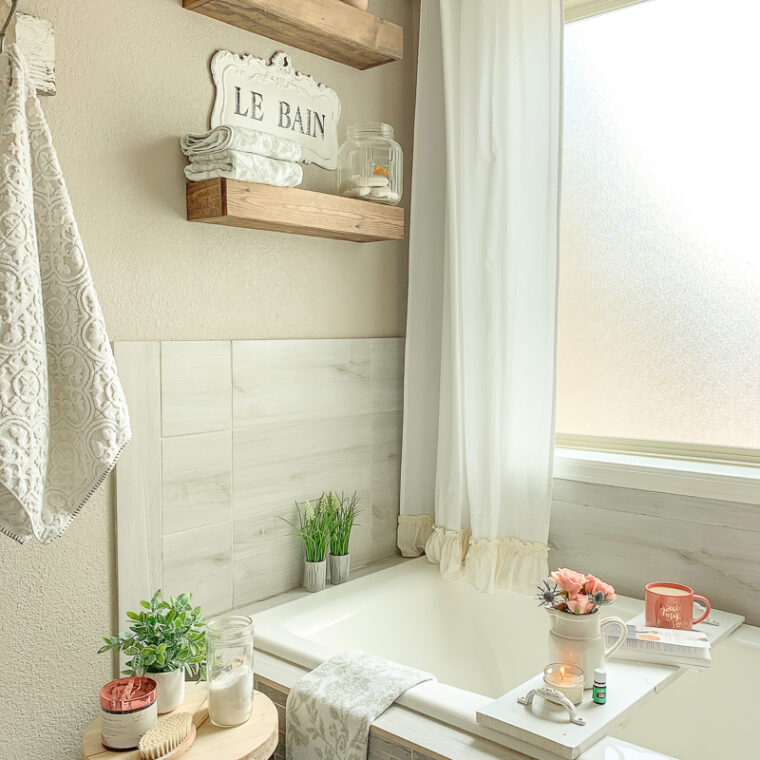